To commemorate the birthday of the school, we organised a Superfly World Cup at The Lawn @ Marina Bay and an Anniversary Jam the next day at Buangkok. The game was such a blast, everyone was so co-operative and enthusiastic! I guess I could say that everything went well even though we started the game a little late. The funny thing is – there was a bit of a fence around the grass because they were watering the dry field! Which worked well as a barricade around the field while we played. It all worked out really well! While waiting, we had a mini-game along the huge pathway beside the field – playing it street-style just to warm ourselves up!

When the match started, we divided ourselves into two groups. Our youngest student, Caleb joined in too! Such a young and bold participant of the day. Also very supportive. He brought some water guns for all of us to take turns, and our Coach Derrick was going around shooting water at everyone during the break. On the sidelines, Jaz and Keann were trying to order our pizza. It was hard to get through, though. Apparently a lot of people order pizza on Friday night, but we made it somehow!

There were people rolling over the grass, ohh, many sliding tackles, and scoring goals into goal-posts made out of bags or whatever seemed big enough to see. There was bonding and teamwork. And so, the match ended around 9pm when we stopped the match for the last goal and of course – THE GROUP PHOTO! 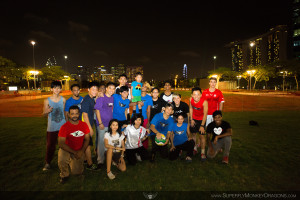 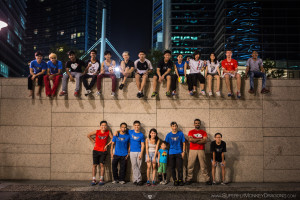 By the time we were done trying to get the best photo, OUR PIZZA CAME!!!! Right on time! Jaz was like our DJ, pumping up the playlist for the atmosphere. At the end of the day, we’d like to thank everyone who came and I’d like to introduce our new team to you:

We have Coach Nicholas Gabriel, who holds his class every Monday and Tuesday.

We have Coach Ben Matchap, who holds classes on Wednesdays and Sundays.

We also have Coach Richie, who teaches an Advanced Parkour Beginner class on Saturdays!

We have Jaz, an Athlete Ambassador and also our music tech for our videos such as #SICKSPOTS.

We have Keann, our Athlete Ambassador who has been with us for a year now, and the one organising community events for all of us.

Of course, we have our Founder/Coach Derrick Siu who does his conditioning class every Monday and Friday morning to make you guys stronger!

Last but not least…

Hey guys! My name is Ambry and I do videos and graphic stuff for the class and store, as well as writing this website. I have a great time being part of this team and I learn so much, all the time. So thank you all for supporting us. Without all your support, Superfly Monkey Dragons wouldn’t be here and I wouldn’t be given the opportunity to give back to the community as an Athlete Ambassador of the team.

On a side note,

Posted on August 20, 2014 by Ambry Nurhayati in Parkour