Another awesome weekend! We had the bloggers from Nuffnang join us for an Introductory Workshop at Bishan. We were so glad to be able to introduce a whole new world to them, starting off from the usual warm up around the big space followed by some conditioning. Of course, for starters, that would be very physically challenging – but everyone made it!

Trying to sense each other movements.

Right after that – wall climbs! It was not so easy for the ladies as compared to the gents, but they managed to pull it off with all their strength. Kudos to all the girls for the effort! Nevertheless, no matter how big the wall was or how tall they were, Ambry showed them that it was possible to get over the obstacles despite her petite size. 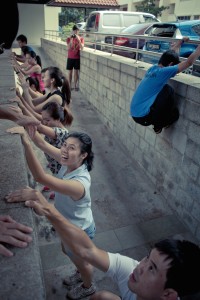 Learning how to do a wall climb.

After the arm work, it was time to train our legs with precision jumps under Coach Ben. We even had games to spice things up a bit. It’s a little bit like “Hot Lava”, but with team work and remaining silent at all times – a good training to hear our movements! That’s not all that we had for the workshop. 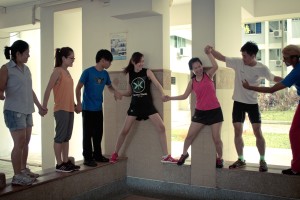 Coach Nick held the last segment – vaults. Yes, vaults. We had Coach Ben and Calvin to assist on the railings so that everyone could learn how to do a proper vault and get over the fear of getting over. 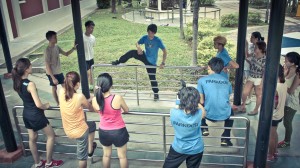 At the end of the day, I think it’s safe to say the bloggers got a good taste of parkour within two hours! From warming up to conditioning. From wall climbs to precision jumps to vaults. I guess it was good that we all did a warm-down after the fun and hectic day! It was such a pleasure having the guys and girls from Nuffnang. We hope to see you all again in future classes! 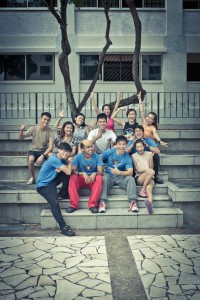 Thanks Remus for all the photos! 🙂