We hope everyone had a splendid weekend like we did!

Last week, we organised a BBQ for everyone at Pasir Ris Park. Its probably one of the most unique BBQ ever held. We started off buying the equipment and food at White Sands. It was a lot of things! Thank God I had someone to help us transport the equipment which made it much easier for us.

Alright! Moving on. Why did we say it was the most unique BBQ ever? For starters, we already had Jeroen with his bow and arrow. We tried starting the fire by the bow and fiery arrow – Turns were taken between Jeroen and Ben – but unfortunately, after many tries, it didn’t happen. We finally gave in and started the fire normally. Thence, our adventurous Superfly Summer Sizzle began!

It was only a matter of time before more people came in. We managed to get a coconut from the coconut tree all thanks to Ben and when we finally split it into half, half of the juice had spilled out. But that’s ok! It wasn’t all wasted. I think the coconut should be our mascot for this BBQ considering the amount of things we did with it. It became a little bit like The Hunger Games where the coconut also became our target practice. Yes, who needs archery right?

When the sun went down, we embraced the twilight by the beach with a campfire made by Ben with half of the coconut shell and toasted marshmallows. Mmm, the coconut again. But hey, we used our survival skills for fun! Meanwhile, on the other side of the grill, Keann and I was preparing a surprise. Coincidentally, we were also celebrating the birth of our friends born in July. In this case, it was Ben and Jaz. So we were preparing some bombs made from plastic bags and filled it with flour and eggs. Who needs to buy a birthday cake right? 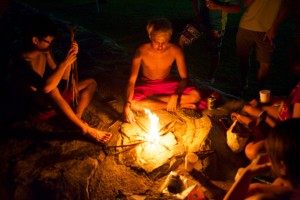 But there’s a twist to this story. Ben thought we were only surprising Jaz. So he joined in believing he was helping send cheer to Jaz, only to be find out he walked into a trap and! Of course, after that, vengeance filled each other and we started throwing flour and eggs at each other. Even the actual birthday cake fell to the ground, but luckily we were able to salvage a tiny bit for birthday candles so we could sing the birthday song to them.

And that’s how we ended our Summer Sizzle!

Hope everyone had fun.

All of this wouldn’t happened without ALL OF YOU! 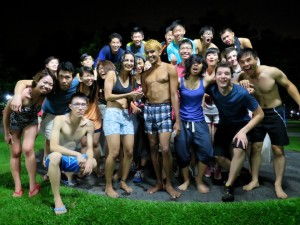 After all the chaos!

See all of you back in class and watch out for the next thing in August!